Help us fundraise for free every time you shop online!

Shop and earn donations for free

Search on GoRaise for the retailer or product that you want, and click out. It's that easy.

Shop as normal and the retailer donates a portion of your spend to us. You don’t pay a penny extra.

Whether you're buying a new outfit, flights, computer equipment or furniture, we'll have the right retailer for you! 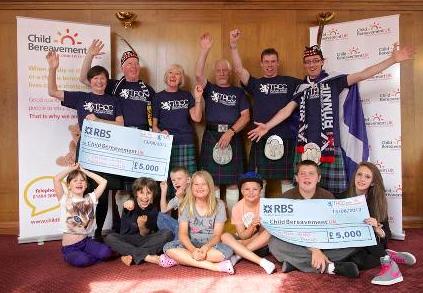 Our aim is to help disadvantaged children in Scotland and in countries that we visit whilst supporting Scotland’s national football team.

Scotland fans are always made to feel very welcome in the countries we visit so with these donations we give something back. Support for disadvantaged children in these countries is generally tragically lacking, so we try to make a small difference.

Since 2006, TACC raised and donated over £40,000 to blind, disabled and street children in Ukraine, Georgia and Macedonia.

We revisited a school for blind orphans in Kiev in February 2010, donating £5,000 towards recreational items such as paints, balls, play mats and day trips.

In 2010 TACC donated £20,000 to an orphanage and homes for disabled children in Lithuania, and £15,000 to a school for autistic children in Czech Republic. The majority of these grants provided playgrounds and other  facilities to bring a bit of fun to the children's lives.

On our trips abroad we make grants and other gifts to children's institutions (orphanages, hospitals, special needs schools) or individual children in those countries according to their needs. Grants are used to buy items such as clothes, shoes, blankets, beds, educational equipment, medical equipment etc, or help fund projects such as playgrounds.

We always make sure that the donations are used in a tangible way rather than swallowed up in admin costs. In Georgia for instance we donated an incubator which has already saved lives in a premature baby unit which had an appallingly high mortality rate. During our visit we found two desperately ill babies sharing an incubator.

We also like to throw a party for the children, with a pipe band and food and drink to make this a real treat. In fact the feedback we get is that the party can be more important than our donations, just the fact that we want to take the time to be with the children.

We support disadvantaged children in Scotland with our “My First Scotland Match” programme – taking children to Hampden for their first experience of watching their national side. Such a treat is generally out of reach of the children invited and the project acknowledges that not every child is lucky enough to have someone who’ll take them to their first match.

We also organise a Christmas Present Appeal with Scotland supporters each year for Aberlour Child Car Trust, with £8,500 of presents donated in 2009.

In 2010 we will also be launching several local initiatives to help tackle child poverty and neglect in Scotland.

In a venture with Spartans FC in Edinburgh, TACC will give children a game of football and a hot, healthy dinner on Friday evenings. Outwith school hours, some of these kids would not have a nutritional meal and this project promotes healthy eating while encouraging social inclusion in an area which is considered socially deprived.

Join Today and Support Us

Raise as an individual supporter whenever you shop online

Add your company to start raising with your colleagues

See our FAQs or visit the Help Centre for more resources

Is there any cost to our cause or supporters?

No, it's completely free for your cause and supporters. The only cost is to the retailer.

Why do the retailers make a donation?

When you visit a retailer or service through goraise.co.uk they offer a donation as a thank you for your custom. Our partner retailers like to help, but it's also a way of attracting customers, so they essentially put it down as a marketing cost.

Sounds too good to be true – is there a catch?

There’s no catch, and to confirm, it won't cost you a penny!! In fact, there’s £millions worth of retailer commission available every year to fund good causes across the UK. Amazingly, many causes are still unaware of this easy, free way to generate funds through everyday online shopping.

How much of the donation does GoRaise take?

We don’t take a penny of the amount displayed. For all retailers we show a donation rate (% or £), which represents the full amount you are raising for your cause. For clarity, GoRaise is a commercial organisation, and we receive an additional payment from the retailer above and beyond that shown on the site.

Can any cause use GoRaise to fundraise?

Yes – any good cause (an organisation with unselfish goals) can use GoRaise to generate funds, from small community groups to national charities. Your favourite cause may already be registered. If it isn’t, it can be added for free. GoRaise helps charities, sports clubs, PTAs, community groups, churches, youth groups (Girl Guides, Scouts etc) and lots of other great causes.

How do we get paid?

You can choose to receive your money into a bank account or direct donation platform. We pay our causes every quarter and challengers monthly. We'll let you know once the payment has been sent. Please note: causes have to have at least £15 (and Challengers £2) in their account before we make payment